Despite not having attended kindergarten,

Dan managed to graduate high school with the top honours in auto shop! 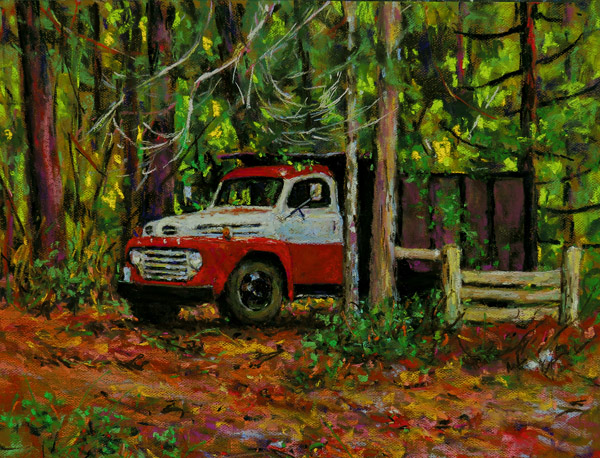 the old Dart(also old Suzuki motorcycle) have left the building...my energy for projects outside of painting is flagging one last portrait 18 x 24" pastels from life 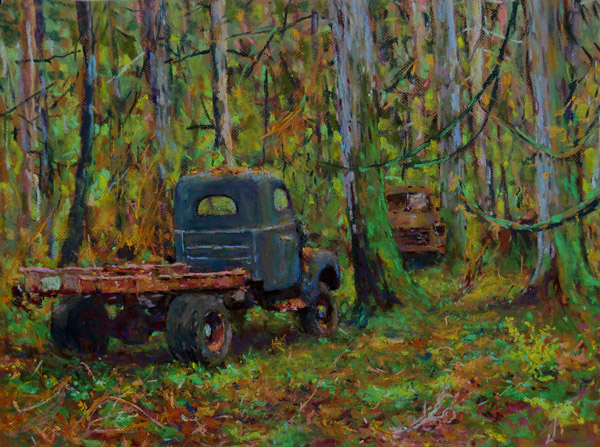 Dec 5, back in the woods with the 1949 International

a cool day in an Errington wood 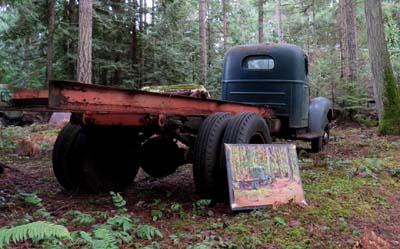 Ford in a Wood 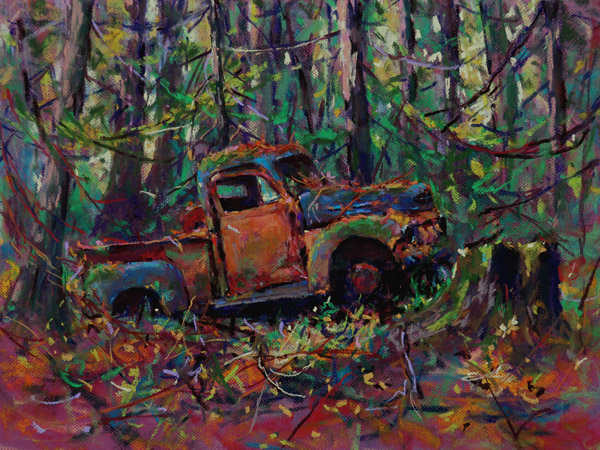 told stories etc the attendees seemed to enjoy it. 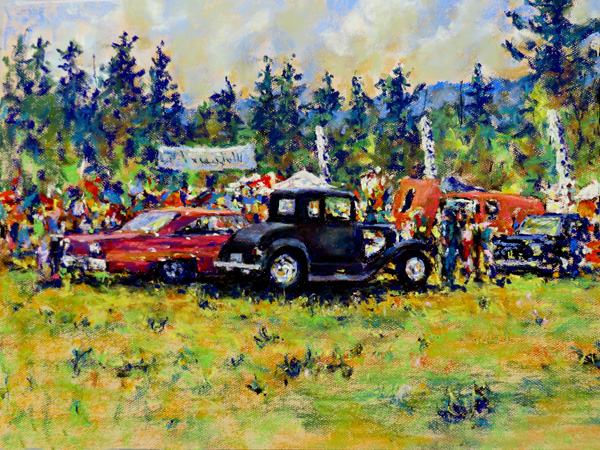 after painting set-up at Erringtons Farmers Market in the morning

over to Coombs for Blast from the Past this 1930 Model A was parked in the right spot. 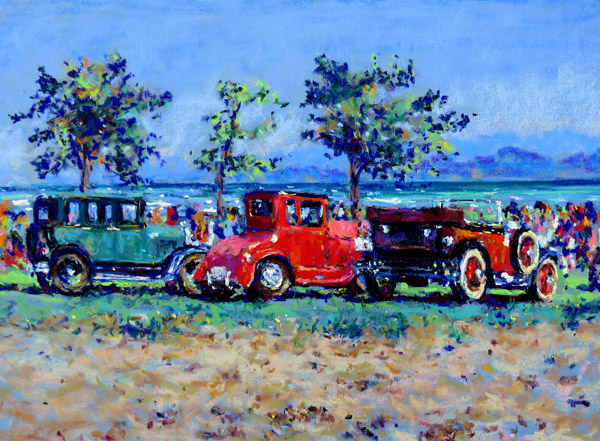 I see a lot of friends at these shows 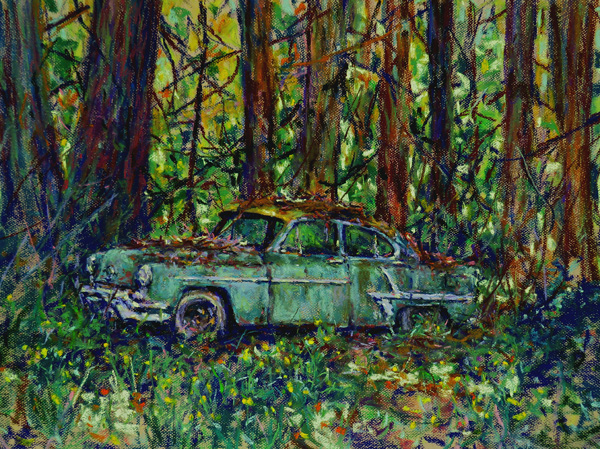 a legendary vehicle a Rocket 88 in a wood in Errington '52 or so, a start to a hot rod weekend, pastel from life, 18 x 24" vintage canson

Chev in the Wood 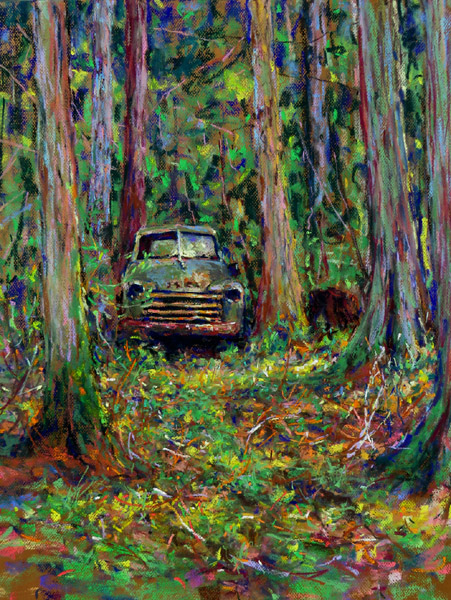 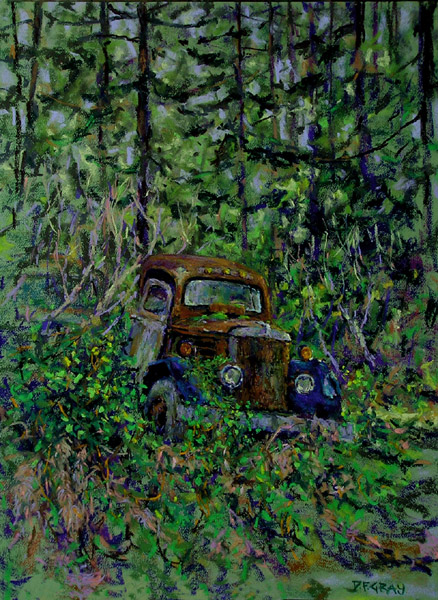 Jan 30 in an Errington wood, a favourite subject...foggy here in the morn so down to the shore for the fog but the fog had lifted so back to Errington for my backup, the fog did lift here also, 'White in Winter' 24 x 18 " pastel on vintage canson then back to the woodpile getting ready for(next) winter 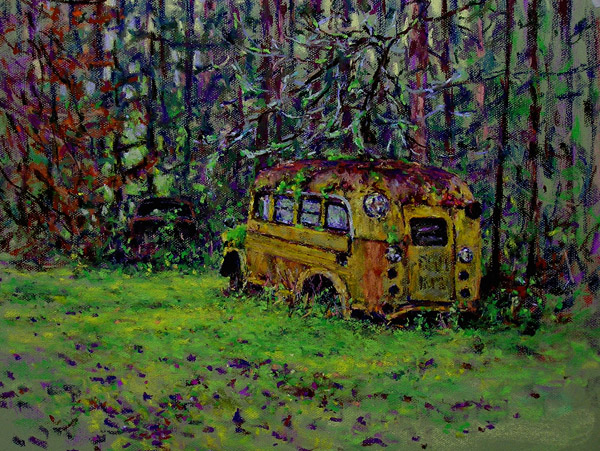 Dec 12 in the woods, working through rain showers but the downpour showed up 18 x 24" pastel from life on vintage canson, my paper is older than the bus 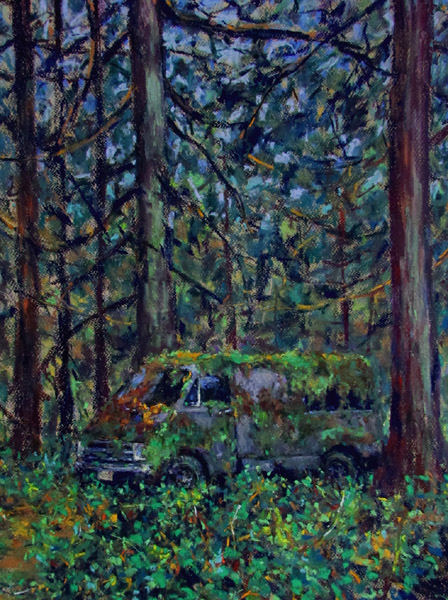 Nov 4 a call from a neighbour about this Van in Deep Errington who thought I might like the subject, when it first arrived in the late 70's it was called "the Love Machine" it is resting in a cedar grove 1978 Ford 24 x 18" pastel from life 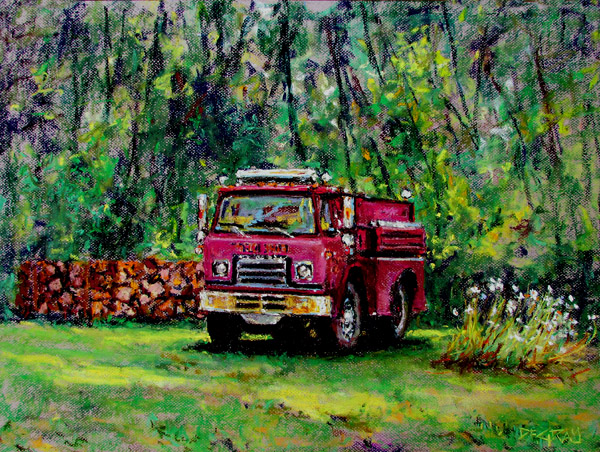 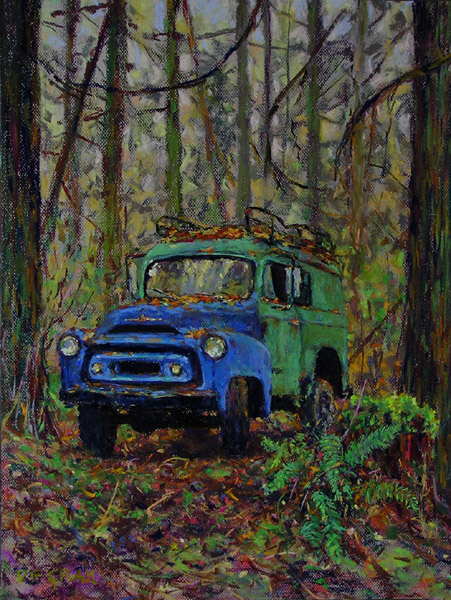 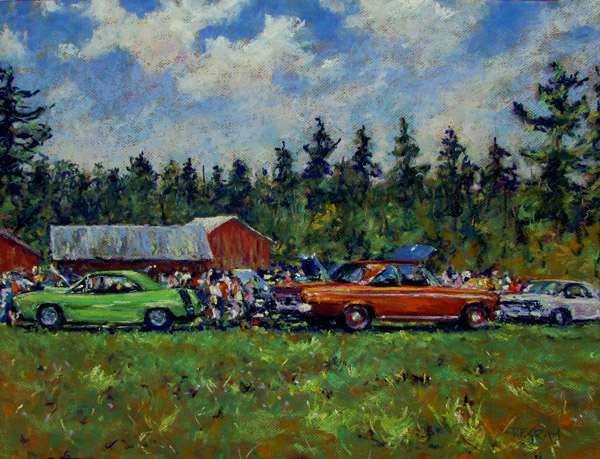 May 27 the 2nd Mopar show at Coombs, I was painting next to an old model of (the Old Errington Fire Truck) 18 x 24" pastel from life 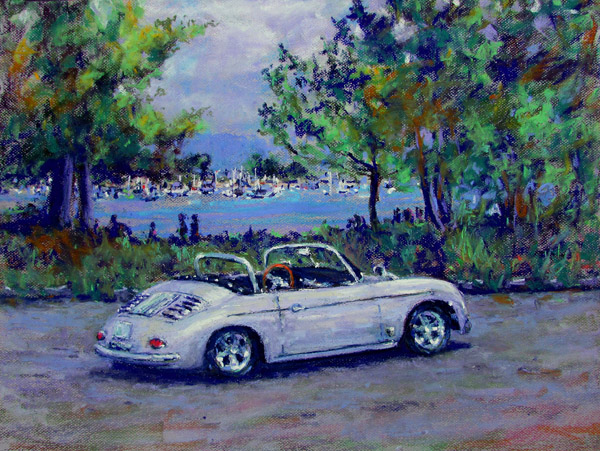 May 20 the first Heritage Day Car Show in Nanaimo 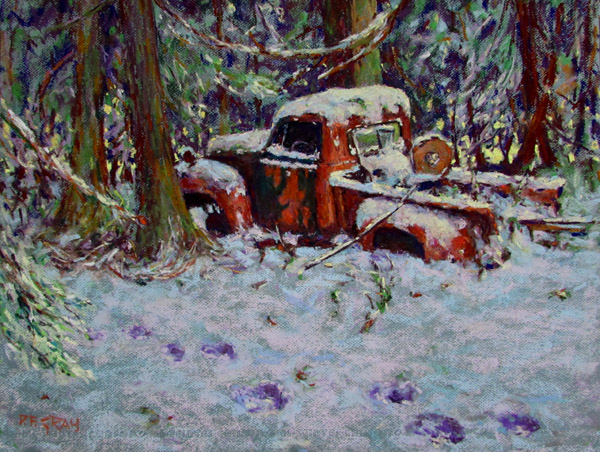 Winter Solstice went to a forest where I am Artist in Residence, revisited one of my favourite fords,

and found that Brother or Sister Bear had just been by (not hibernating yet) compared my tracks and fresh scat, 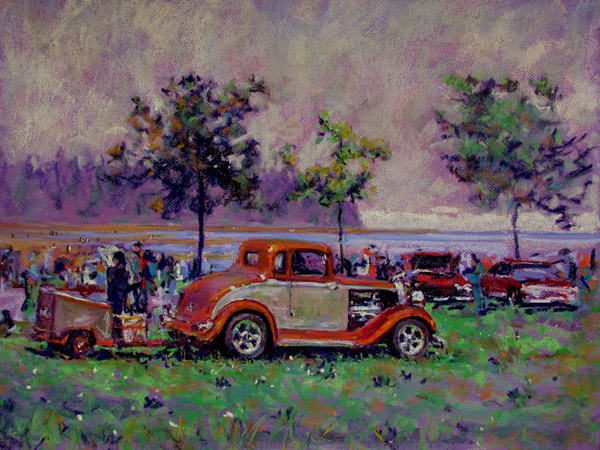 Aug 6th Car Show on Parksville Beach and another 33 Chrysler, smoky and cool in the morning, 18 x 24" pastel from life 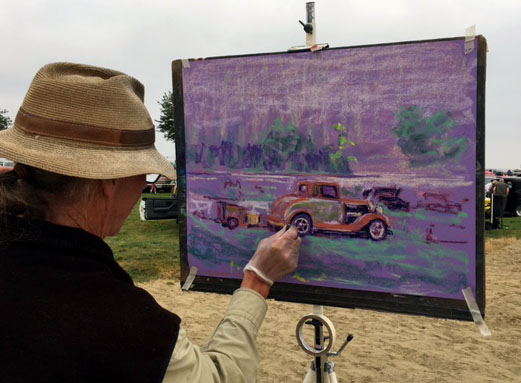 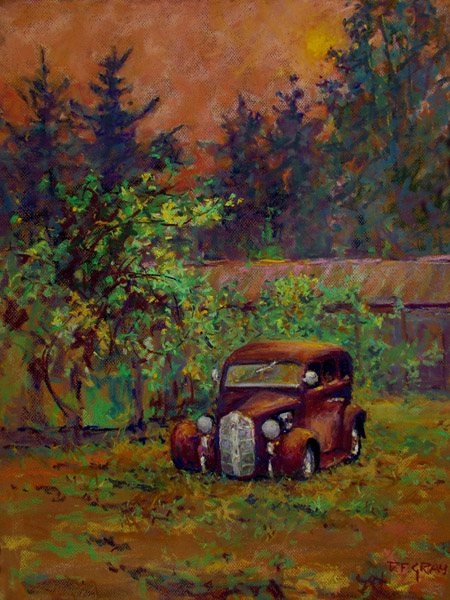 Aug 5 'Blast from the Past' Coombs Fairground smoky morning with this 33 Chrysler four door, 24 x 18" pastel from life,

painted two more pastels this day, the last one a sketch of a truck for a Rodders '83rd Birthday 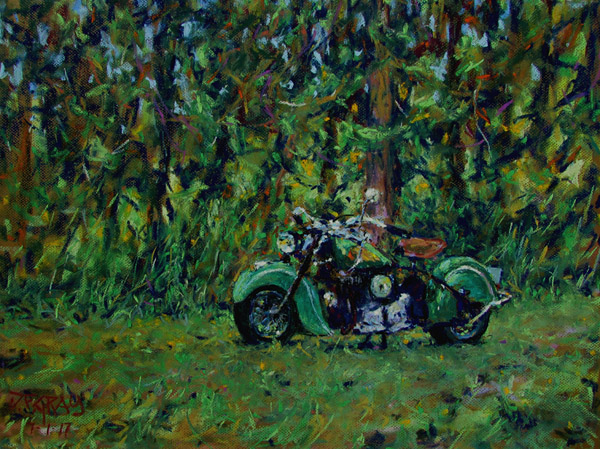 Canada Day, Sandra Volunteered at the Errington Market, I drove up to Bowser Legion for a car show,

upon arrival at the show I find this 1947 Indian Chief (the same year as me) I looked around at the cars but was called back to the bike.

My Dad a Canadian Navy man in WW2 was an Indian rider and I was named after his best friend another Indian rider so to paint this seemed right.

While painting the local Piper band set up right next to my easel to play and my Dad was a piper! 'the Spirit of Terry Gray' pastel from life 18 x 24" 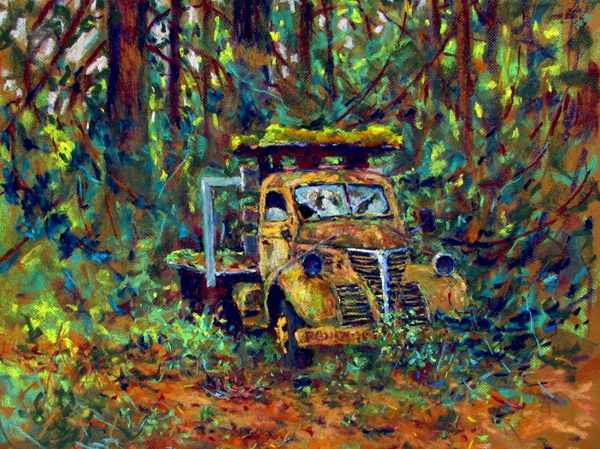 June 13, Ponderosa Logging Fargo, in the woods, late 30's? worked until the rain, hoping for a hot rod or two this weekend, 18 x 24" pastel from life

International in the wood 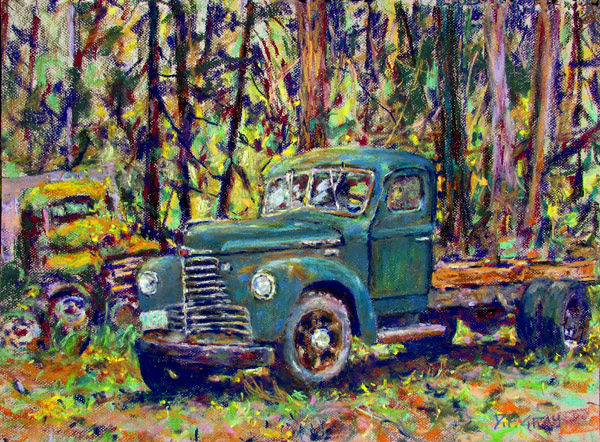 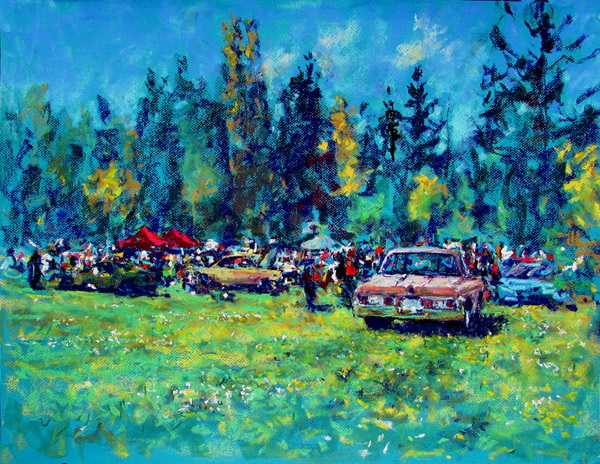 mopar car show at Coombs, May 28th in the sun, practice for the Father Day weekend Hot Rod shows, 18 x 24" pastel from life 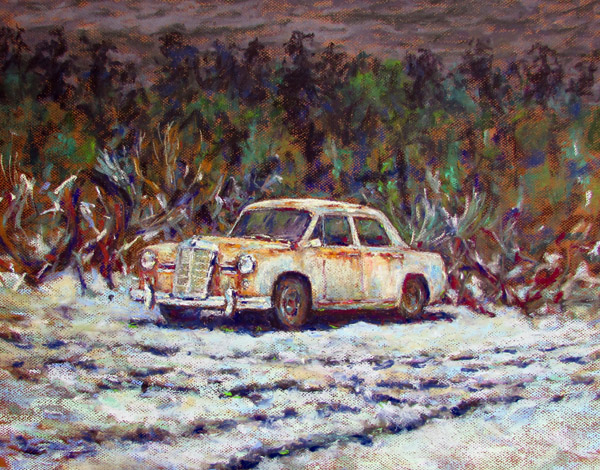 1959 180 Merc, sitting in the snow which is fast leaving, the car has been painted by the owner Horst Loewel with his surreal scenes but has been sitting here in the broom for awhile and fading. I have painted others from his collection, these were the taxi's of the day.....the car is signed 18 x 24", pastel from life 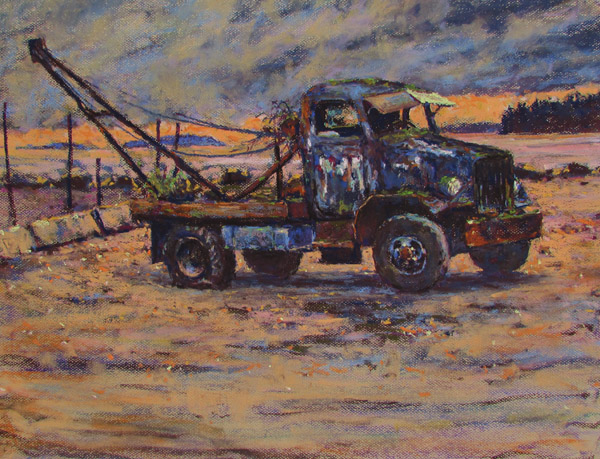 December 12 on our way for seafood Sandra Spotted this parked in the transit lot at the French Creek Marina, a 30's Chevorlet which has lived on Lasquiti Island for awhile 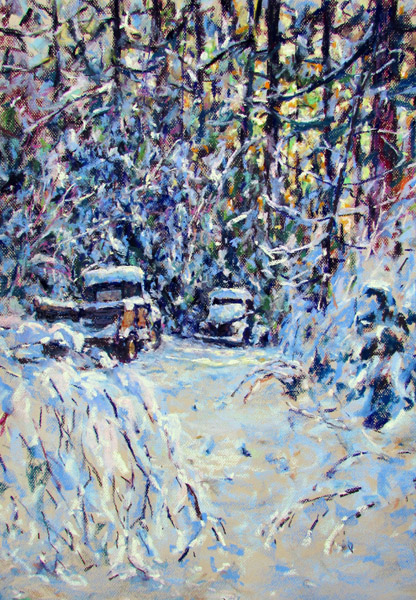 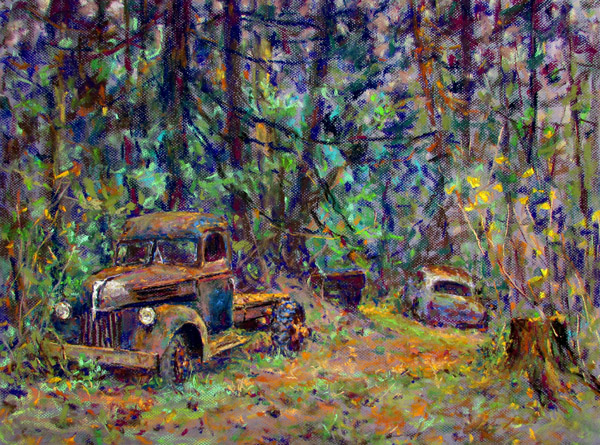 November 10th, working in an Errington wood along a Errington trail